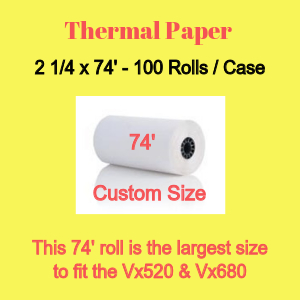 What are you talking about???

When the EMV or Chip Card became the standard, the most commonly used piece of equipment in the industry were the Verifone Vx520 Countertop and the Vx680 Wireless terminals. Surprisingly enough even FirstData which has there own branded terminals were also using the Vx series. There were many other EMV capable terminals in the industry, but apparently the Vx series were the first terminals to have the best integration and all merchant service companies were scrambling to get their merchants up and running using the mandated EMV terminals.

I know this doesn’t seem that important, but I feel it is very important to the industry and that is PAPER SIZE! Say what, yes that is correct paper size is important. Everyone using credit card machines were using 2 1/4 x 85′ for their old terminals and unfortunately they did not fit the new Vx series terminals. So for those with a lot of 85′ rolls they had to pull out the paper until it would fit. That was a huge pain in the ass!!!!

When merchants started complaining about wasting paper because they had 85′ rolls the merchant service companies started telling merchants to use 50′ rolls. When merchants started using 50′ they said damn, now I’m running out to fast. Seriously, what the hell is going on??? After complaining that it is to big or it is to small I found the happy medium, 2 1/4 x 74′. Thank God, now I can maximize the size of the roll and run more transactions without having to change the damn roll!

Purchase the largest roll size your gonna get for the Vx520 & Vx680 terminals. Not only is it the largest, but it is the cheapest your gonna find.